From the back cover of the Phoenix Press booklet: “Valerie Solanas’ SCUM Manifesto was written in 1967 and published in 1968, the year she shot and wounded Andy Warhol. The text used here is that of the 1983 edition of the Manifesto that was published by the Matriarchy Study Group.”

“Life in this society being, at best, an utter bore and no aspect of society being at all relevant to women, there remains to civic-minded, responsible, thrill-seeking females only to overthrow the government, eliminate the money system, institute complete automation and destroy the male sex.” 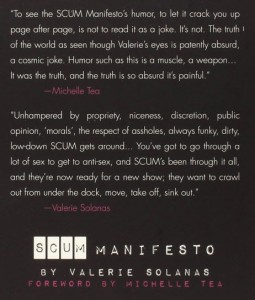