ME: A day after watching the weird powerful ugly transcendent, poppy “tedious” gorgeous classical absurd, profoundly absurd, #TheHouseThatJackBuilt I’m so sure #LarsVonTrier was absolutely spot on when he said with deepest modesty, “I am the best film director in the world.”

The unrated director’s cut of “The House That Jack Built” played in theaters November 28, but the MPAA says distributor IFC violated a rule to screen the film. 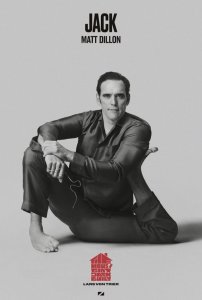 With Hold the Dark, Netflix’s Original Movies Are Finally Getting Interesting
SEPTEMBER 28, 2018 8:22 AM
by TAYLOR ANTRIM, VOGUE

“Hold the Dark, which starts streaming today, is the first of this new class of films, and it’s a fascinating hybrid of thriller, horror, and slow-burn psychological drama. It’s the third feature from 42-year-old filmmaker Jeremy Saulnier, whose last movie, Green Room, was riveting: a bloody story of a hard-core punk band menaced by a gang of white supremacists. That movie (and his first, the disquieting revenge thriller Blue Ruin) were tightly wound genre exercises. Hold the Dark is something weirder, looser, and more ambitious, a sprawling story set in Alaska about wildness, violence, and the ties that bind.

Based on a 2014 novel by William Giraldi and starring Jeffrey Wright and Alexander Skarsgård, the film is set in a snowy landscape where wolves prowl and the Alaskan frontier citizenry is armed to the teeth. A young mother, Medora, played by a haunted-looking Riley Keough, contacts a nature writer and wolf expert named Russell Core (a brooding, heavily bearded Wright) in anguish, saying her son has been carried off by a wolf pack. The boy’s father (Skarsgård) is away soldiering, and she’s on her own, and peculiar for sure—if the wooden wolf masks hanging on her living room walls are any indication…”

Trump wants to see the death penalty come “into vogue” again. He’s wanted that for years.The president has a longstanding fascination with capital punishment.
By Jennifer Hijazi Oct 28, 2018, VOX

” … The president’s support — bordering on fascination — for capital punishment goes back decades. In the 1980s, when Trump was a fixture of New York City’s real estate community and social scene, he took out an $85,000 full-page ad in the New York Times calling for the death penalty for five teenage boys who were suspects in the brutal rape of a female jogger in Central Park. The boys came to be known as the Central Park Five.

The ad, which was released before the boys even faced trial, read:

I want to hate these muggers and murderers. They should be forced to suffer and, when they kill, they should be executed for their crimes. They must serve as examples so that others will think long and hard before committing a crime or an act of violence.

After its release, the boys underwent intense interrogation without food, water, or sleep, and were coerced into a confession. They spent 13 years in prison, only to later be absolved of the crime after a confession and DNA evidence surfaced in 2002.”

“I am the infinite reality”

“On Tuesday, the Dodgers became the first team in baseball history to open a World Series with their four leading home-run hitters on the bench. On Wednesday, they did it again. L.A. is now down 0-2, and is hitting just .175 in this World Series, and has just one measly extra-base hit. It’s possible the Red Sox merely needed to start a pair of lefties, any lefties, for the Dodgers to go ahead and beat themselves...”

j u s t c r i m
Create a free website or blog at WordPress.com.